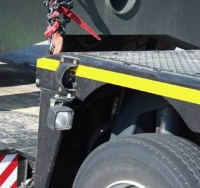 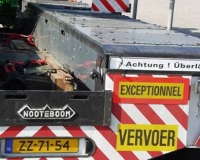 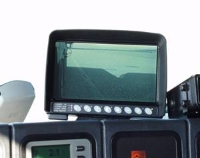 With its fleet of approximately one hundred low-loaders and extendable trailers Holtrop & Van der Vlist in Assen is one of the largest providers on the special transport market.

With its fleet of approximately one hundred low-loaders and extendable trailers Holtrop & Van der Vlist in Assen is one of the largest providers on the special transport market. Typical for this kind of transport are the exceptionally heavy, long and wide loads that in some cases even require special escorts for the transport. Thanks to the smart way in which the ORLACO cameras are mounted now the driver can keep sight of everything himself!

With a vehicle this size damage is easily made. This gave Holtrop & Van der Vlist all the more reason to ask ORLACO for a suitable vision solution last year.

It soon became clear that two cameras were needed to bring the running of the axle system into vision. In addition, the cameras are mounted behind the wide load, to provide the driver with vision on the blind spot there as well. Cameras with a small aperture angle were used for this purpose in order to only bring into vision that part that is needed. It is also quiet common for a load to stick out behind the vehicle. ORLACO offered the right solution for this problem in the form of a camera on a magnet base that can be mounted on the projecting part. ORLACO even made sure the wires remain easy to keep track of. Despite the fact that no less than three cameras are used on the trailer, only one wire is required to transfer the images to the monitor. Last but not least a front-sight camera was installed on the corner of the cabin.

Now no corner remains hidden for the driver!

Risky and dangerous situations can occur when a vehicle reverses or turns left or right. The drivers of current commercial vehicles are not able to see anything happening in the area falling between t ...Read more...